Storage - where, what, why and how?

Storage - where, what, why and how?¶

Where is the largest disk usage

What is using up the disk space

Why is it there (data triage: maybe you no longer need it)

How can you reduce your usage to make room for MORE!

Find your disk storage quotas and usage in one hit:

To query usage for an on-disk file system, NCI provides commands which report on filesystem usage, updated daily. On NCI systems, it is the project owning a file that determines how it is accounted for, not where the file resides on the filesystem

CMS has put in place a Grafana server for visualising a range of accounting statistics for CLEX. You can access this server using your NCI credentials. 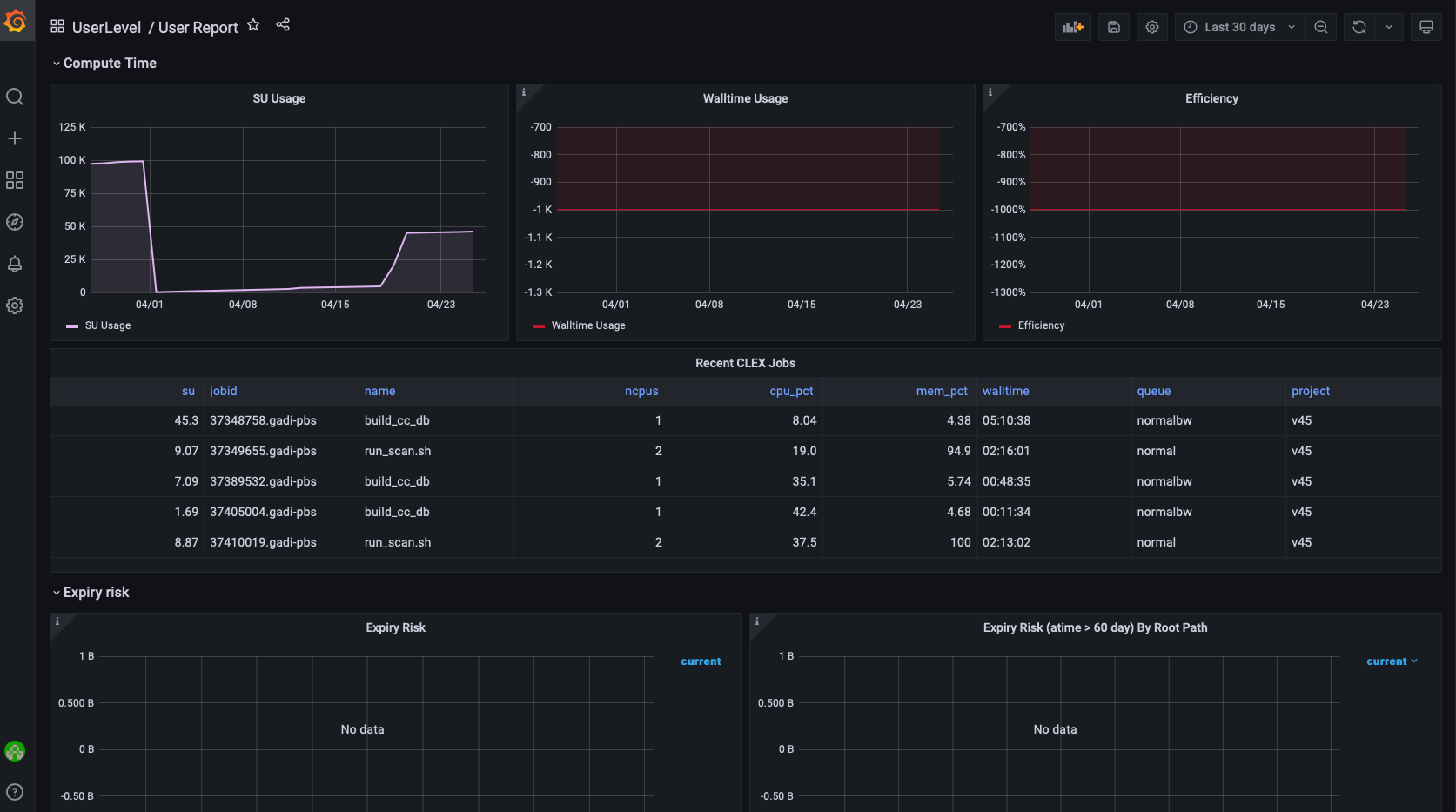 More details on how to use these and other accounting tools are available from the CMS wiki.

When you know where to look, to find out what is using all the disk space, you can use ls, du and find

But there is a better tool: ncdu

ncdu crawls the directory you point it at, collects all the information about the files and directories, and presents this as a curses based interactive program. Using the arrow keys and navigating to another directory shows a view of the storage usage in that directory. Press ‘?’ to get help on the options available. ‘g’ changes the layout. ‘C’ lists by numbers of items. ‘c’ will show how many items there are in a directory.

Once you’ve found the files taking the space, you need to find out what are they? The unix command file can help in some cases

It will correctly identify netCDF4, and grib, but not netCDF3 or UM history files.

To see what is inside a UM history file, netCDF file, grib file (as some examples of common data file types):

To see all the available options:

Why do I produce this data? If you’re running a model: check the diagnostics (output variables) being produced. Do you need them all? Before starting a run, check you will have enough space to store all the data produced.

Analysing data: does your workflow involve:

Explore other approaches! You may be needlessly making multiple copies of data when a different approach could eliminate this. An example is the powerful python library xarray, which can open multiple files as a single data set which can be subset easily in time and space.

How can I use less disk space? Data triage: Why am I storing these files?

How can I use less disk space for the files/fields I must keep?¶

netCDF4 has lossless internal compression (transparent to user) which is typically half to a quarter of the same data uncompressed.

nccompress can be used to batch compress netcdf files. To access this command:

For help on all available options:

You can reduce the precision of netCDF data, known as packing.

The CF conventions have standard attributes that CF compliant tools support: variable attributes scale_factor and add_offset are used to reduce the precision of the variable. Generally, halves size of file.

Packing is more reliable when data is produced, as problems can be corrected, and data regenerated. We don’t recommend packing existing data: it is lossy and there is high potential for corruption, but if you must, nco (module load nco) has a tool for packing

Bit grooming is a form of precision-preserving compression, similar to packing, but does not suffer from the degradation of precision within the narrow dynamic range of values chosen. It is an active area of research, and new algorithms/approaches are being developed. Generally, these approaches remove spurious precision from scientific data, usually model output, that has no informational value, and by doing so makes the data more compressible. In a real-world application the data was less than half the size of the same data only using compression.

UM history files can be compressed with tools like gzip, but this can be time consuming, and the file must be uncompressed before using. Alternatively convert to compressed netCDF4.

The ACCESS Archiver is designed to archive model output from ACCESS simulations. Its focus is to copy ACCESS model output from its initial location to a secondary location (typically from /scratch to /g/data), while converting UM files to netCDF, compressing MOM/CICE files, and culling restart files to 10-yearly. Saves 50-80% of storage space due to conversion and compression. Supported versions are CM2 (coupled, amip & chem versions), ESM1.5 (script & payu versions), OM2[-025]

Please note that you need to use your NCI credential to get access to the repository.

Will create textfile.gz and delete the original file.

How can I reduce the number of files I store?¶

There is a limit on inodes (number of files) on NCI machine. If you are close to this limit you need to reduce the number of files you are storing.

One solution if you have a large number of netCDF files is to aggregate them.

Some models produce large numbers of files, e.g. one per time step. Dimensional information and metadata are repeated, so it is redundant, this approach can save a lot of storage space as well.

and once you are satisfied the merged data is correct, delete the original data files.

If you have a large number of text files (logs etc) you can use tar:

This will put all the files in a single tape archive file and compress everything on the fly. Once again, the originals must be deleted, or optionally you can use the --remove-files command line option to remove the files as they are added to the archive.

To see the contents of a tar file:

and to uncompress and restore all files

Move data up the storage hierarchy:¶

In general, the higher up the hierarchy the greater the available storage, but files should be larger as inode quota reduces for the same storage amount.

Have a data workflow that moves data from scratch to gdata to massdata in a planned manner.

If inode quota is already tight on scratch, files must be aggregated when moving up the hierarchy. Massdata is faster with larger file sizes due to physical limits of tape.

Moving data up the storage hierarchy means copying data from one on-disk filesystem to another. Can use cp

Use rsync for large operations, if it times out, you can run the same command and it will resume copying only that which has not yet been duplicated

In some cases, it is important to not enforce group ownership, say when copying files that are owned by one project into a space where the files should be owned by a different project. In this case don’t use the archive option (-a) but use the following option spaghetti: -rltoD

Moving data between disk and tape¶

The “highest” position on the storage hierarchy is the tape based massdata store.

You can put large amounts of data with netmv / netcp. These tools make a tar file of the directory you are trying to move, can be slow and increase disk usage dramatically in short term. Data must also be retrieved again in large quanta. This is usually not recommended.

Using the mdss command to transfer on a login node will generally time out before all data is transferred. So, the best option is probably to use an interactive PBS job, or create a script, and use mdss put -r.

CMS has written a tool (mdssdiff) to help with this. It is also available in the CMS conda environment.

To show differences between local directory and remote copy on mdss:

As above, but specify project

More information on the NCI tape system and mdss is available from the CMS wiki.

An example of reading non-standard data using pandas and xarray